USA Today had stationed reporters in various parts of the theatre, and here’s their take: “As the La La Land filmmakers take the stage to accept best picture, the accountant from PriceWaterhouseCoopers jumped up and said, ‘He (Beatty) took the wrong envelope!’ and goes running onstage. Craziness breaks out. No one knows how Beatty got the best actress envelope instead of the best picture envelope. ‘Oh, my God. Moonlight won, Moonlight won,’ a stagehand says, her hands on her head.” 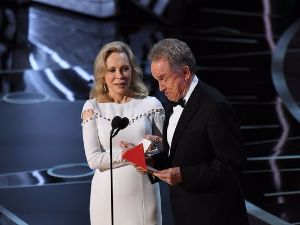