The pick meant that Exposition Park keeps on transforming into less open space than building space, but it “also played to — and in the end confirmed — certain ideas Los Angeles has about itself, that it’s a city without a robust culture of civic engagement, that builds first and asks questions later, that pounces on opportunities like the Lucas Museum of Narrative Art rather than debating them.” 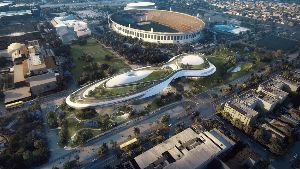