The composer, Mohammed Fairouz, wanted to bring out every Trump similarity possible. The (in effect) executive producer, Francesca Zambello, insists, “It is not about the president-elect or his wife.” The librettist originally had in mind the late Pakistani dictator Zia ul-Haq. And director Ethan McSweeny said, “We were all joking among ourselves that if that guy Trump got elected, this would be the most politically prescient piece of opera ever produced in America. Well, that happened.” 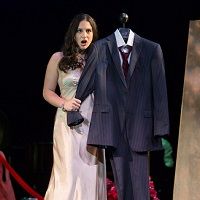