The death of critic John Berger, who is best known for his four-part BBC series called “Ways of Seeing,” has prompted a number of reflections on what it means to be a critic, what makes a great critic, and whether or not the current age values such criticism. Berger wrote often about being skeptical about perceptions of art and hardened wisdom about what it meant. He suggested a way of looking at art that was fresh and personal and questioned the generic.

Today, criticism is often seen as old-fashioned – why rely on some old fart at a newspaper to tell you what’s what when you can bloody well make up your own mind? We usually have immediate access to the music, films, art and books under discussion, so we can just see for ourselves. This is a reasonable position; why peruse a dozen 150-word album reviews if you’re just looking for something new to listen to? Spotify can do that for you. In a world where culture is merely entertainment, criticism has no function.

It’s tempting to think that criticism has been reduced to a Consumer Reports function that gets straight to the point about whether or not the art in question is worth engaging with or not. But

we have to believe that people – ordinary people, sitting at home at night – are interested in nuanced, complex and even difficult art. Only through that will we find someone like Berger, who might help us learn how to look at it. 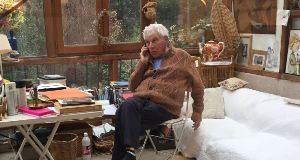