“Chez Nous (AKA This Is Our Land) stars Émilie Duquenne as a nurse who becomes a political success in the Nord-Pas-de-Calais region after becoming involved with the Patriotic Bloc, a thinly disguised fictional version of the Front National. … The trailer briefly features a character apparently modelled on Le Pen, played by veteran performer Cathérine Jacob.” The movie doesn’t open for another seven weeks, but already party leaders are using words like “scandalous.” 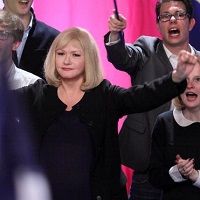