Image of Hope came about because of this: “Baghdad became increasingly divided into neighbourhoods, separated by brick walls. The once lively and energetic city started to lose its character and atmosphere. The walls did not only serve security purposes, but political and armed groups also used them as canvasses for sectarian slogans and political propaganda.” 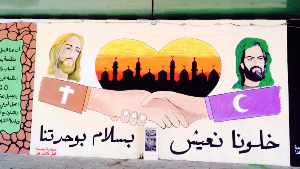