“The “Star Wars” creator is financing the project himself. He plans to spend more than $1 billion to build the museum, endow it and provide a trove of initial artworks valued at over $400 million. Together with Chinese architect Ma Yansong, Lucas has proposed a sleek, futuristic design looks like a cross between the Guggenheim and a galactic starfighter. The museum’s bold design and concept make clear that the 72-year-old filmmaker sees it as part of his legacy, and he is increasingly impatient to break ground.” 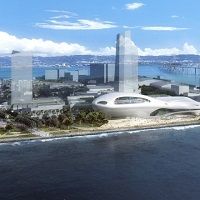