“The St. Louis museum isn’t backing off its commitment to send the painting to Washington, and the effort to stop it is a small pre-election skirmish in what will be a long, fraught and likely disorganized boycott of the Trump administration by artists, scholars, and citizens who align themselves with the arts and humanities sector. The petition, and the flurry of attention it raised, is important as a moment of what might be called the “stress testing” of this country’s cultural institutions. As Trump opponents look to the next four years, they want to know how much cultural and moral capital is stored in the institutions they love. Will museums and universities and arts centers be up to the challenge of confrontation, resistance and truth-telling?” 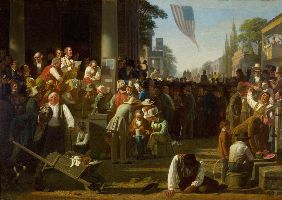