“In 2013, Australian documentarian Anna Broinowski was granted a rare chance to research North Korea’s cloaked and powerful propaganda film industry. … [This excerpt] from her book Aim High in Creation! chronicles the bizarre final days of Broinowski’s North Korean film production boot camp, when she was unexpectedly cast as an ‘evil American wife’ in a film about the 1968 capture of the U.S. spy ship, the Pueblo.” 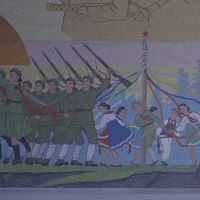