Affleck is getting awards and nominations galore for his performance in Manchester by the Sea. Last summer, Nate Parker was considered an even more likely contender for The Birth of a Nation – until word of his rape trial during college spread, whereupon his prospects plummeted. (Parker was acquitted.) Is the difference because Affleck is white and Parker is black? There are certainly reasons to think not, but the question keeps coming up. 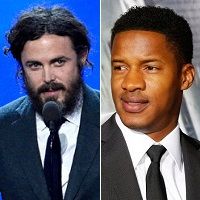