“Critics of the painting said the officers were depicted as pigs, which sparked outrage among Republican lawmakers and some police groups. Supporters said it was an example of free expression that deserved to be displayed. The dispute led to a bizarre back-and-forth as GOP lawmakers unilaterally ripped the painting from the wall and returned it to Clay’s office, only to have Clay and his allies rehang it alongside other paintings selected in the competition.” 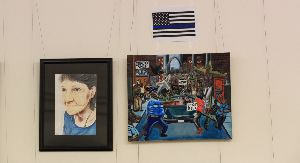