“Looking back now, it is astounding that the point that has so inflamed my academic critics was my claim that the Pirahãs lacked subordinate clauses. You would have thought I had spit on a crucifix during church. I had, of course, expected someone to point out flaws in my reasoning or to give clear examples of data that I had missed or to conduct field research to test my claims. This is the norm in academic debates. But in the first round of criticisms, lasting for five years, what came my way instead was mainly name-calling.” 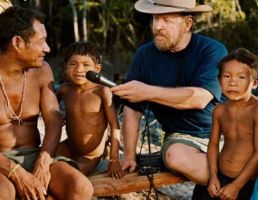