“The outrage [at Kapoor] was based on a slew of misconceptions: one, that Kapoor had exclusive rights to the material, period – he doesn’t, only to one version of it and only in the field of art – two, that it’s a pigment – it isn’t – and three, that the material was ready to be used, which Kapoor himself has raised doubts about.” And now it’s not even the blackest black anymore. 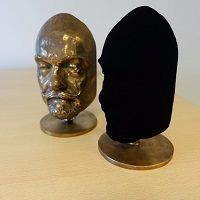