It’s been almost a given for decades that increasing noise and distraction of the modern world has more people feeling like they’re on information overload. In the age of the ubiquitous smartphone it’s only seemed to get worse. For artists, floods of distraction have proved difficult to cut through. But a new survey from Pew delivers some surprising results:

A new Pew Research Center survey finds that, for the most part, the large majority of Americans do not feel that information overload is a problem for them. Some 20% say they feel overloaded by information, a decline from the 27% figure from a decade ago, while 77% say they like having so much information at their fingertips. Two-thirds (67%) say that having more information at their disposals actually helps to simplify their lives.

While these are the overall findings, the study did find some correlations between information access and anxiety about managing information; and in situations where institutions have high expectations for information management.

The silo-ization of our information consumption (as suggested by the recent election) suggests that people may be coping with the deluge of information by cutting off more and more of the world they don’t believe has credibility (or relevance) while burrowing deeper into the websites or sources they know and trust. While the entire web is at our fingers, it’s getting tougher to get people to explore much beyond the places they know. For artists this might require a rethink in how they get in front of people as general sources like newspapers see their audiences narrow. 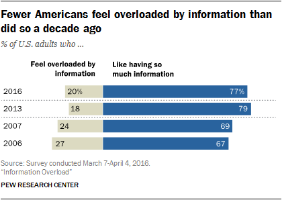