“Faced with the pending inauguration, Greg Allen said in his statement, ‘I could no longer stand by and let my most effective artistic vehicle be anything but a machine to fight Fascism.’ His new company ‘will be comprised entirely of people of color, LBTQ+, artist/activist women, and other disenfranchised voices in order to combat the tyranny of censorship and oppression.’ That explanation was received with ire and disbelief by Neo-Futurist company members, current and past, who say the troupe is now more diverse than it’s ever been, and the breakup is not political but personal—rooted in a long-suppressed history of problems between Allen and the theoretically democratic ensemble that he formed.” 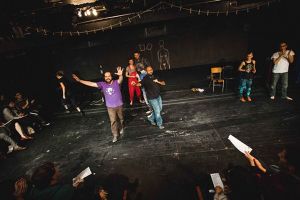