“When we looked at how many active Facebook users in a given ZIP code “liked” certain TV shows, we found that the 50 most-liked shows clustered into three groups with distinct geographic distributions. Together they reveal a national culture split among three regions: cities and their suburbs; rural areas; and what we’re calling the extended Black Belt — a swath that extends from the Mississippi River along the Eastern Seaboard up to Washington, but also including city centers and other places with large nonwhite populations.” 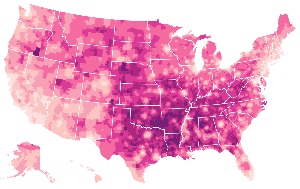