“It was a year when gender equity, racial visibility, and opportunity dominated the conversation in the entertainment industry and beyond. Provocative, representational, and entertaining content about women and for women was as crucial as ever. It was also a year when the best new programming and the strongest of the returning fare—Shonda, Lena, Tina, Rachel: We see you—was created by, starred, and concerned women, while demanding to be consumed by everyone.” 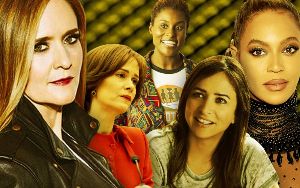