“Lucas’s titanic achievement is even more stunning when you consider his modest roots: he is from, ironically, Modesto, a small city in northern California where his dad owned a stationery store that he expected his son to take over. The taciturn young Lucas had other ideas, heading to film school at the University of Southern California (USC) where he fell in with a new generation of cineastes — among them, Steven Spielberg and Francis Ford Coppola — who would be his co-conspirators in the takedown of the old Hollywood order.” 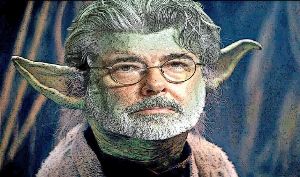