“The Ohio native made his Broadway debut in the 1968 musical The Education of HYMAN KAPLA*N and enjoyed a 50-year acting career, appearing most recently on Broadway in the 2012 comedy The Lyons, playing an elderly man who refuses to die. … [He] won the 2003 Tony Award as Best Featured Actor in a Musical for playing Harvey Fierstein’s onstage husband in the original cast of Hairspray.” 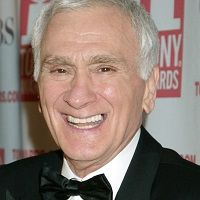