He’d been acting professionally in British theatre, film, and television for seven decades when he was cast (at age 90) as Maester Aemon in HBO’s juggernaut. “With his bulky figure, small eyes and prognathous jaw, he usually played the type of character you would not want to bump into on a dark night in a darker alley, even though, in real life, Vaughan was known for his conviviality,” 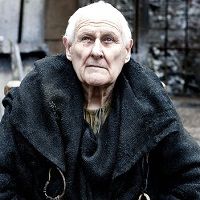