“Originally a child prodigy at the Paris Opera Ballet, Ms. Chauviré was acclaimed as a national symbol of French culture by an adoring public and by the French government, which bestowed its highest honors on her. Although she belonged to a generation of gifted ballerinas at the Paris Opera, she was set apart by a mesmerizing elegance that was never confused with chic.” 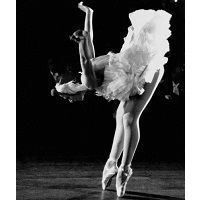