“[Richard’s] success in obtaining the crown depended on a fatal conjunction of diverse but equally self-destructive responses from those around him. The play locates these responses in particular characters … but it also manages to suggest that these characters sketch a whole country’s collective failure.” Stephen Greenblatt, general editor of The Norton Shakespeare, lays out the parallels – not so much between the monarch and the mogul as between Richard’s England and Trump’s America. 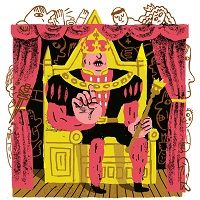