“Pakistan on Wednesday imposed a blanket ban on Indian shows on its television networks and radio stations, a day after one of India’s top film directors vowed not to hire actors from Pakistan in response to a major Indian cinema group’s declaration that it would not screen films with Pakistani casts. The tit-for-tat measures come amid deteriorating relations between the two countries after an attack in September on an Indian Army base by militants who India says were from Pakistan.” 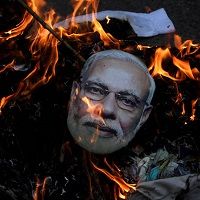