“Just as divine authority was legitimised by religious mythologies, and human authority was legitimised by humanist ideologies, so high-tech gurus and Silicon Valley prophets are creating a new universal narrative that legitimises the authority of algorithms and Big Data. This novel creed may be called “Dataism”. In its extreme form, proponents of the Dataist worldview perceive the entire universe as a flow of data, see organisms as little more than biochemical algorithms and believe that humanity’s cosmic vocation is to create an all-encompassing data-processing system — and then merge into it.” 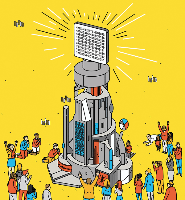