“This year’s attendance – the fifth in a row exceeding six million – was 400,000 higher than that of the previous year. The Met attributed this to an increase of about 200,000 visitors at its Fifth Avenue flagship and the Met Cloisters combined and to 185,000 people taking in the Met Breuer during its first four months.” 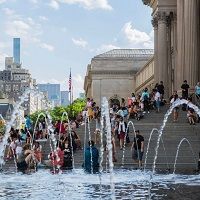