Stating “The children of Chicago are demanding that $100 million of the $7 billion MacArthur Foundation has in assets be used to invest in Black communities and help Black children in Chicago survive violence in their communities,” the city’s Black Star Project staged a march last week on the foundation’s headquarters. Zoe Mendelson writes, “Of course foundations can have their own funding priorities, but at what point does an emergency in their hometown merit special intervention? … MacArthur’s basic stance is that it’s already doing its part. The impossible question becomes: When are you helping enough?” 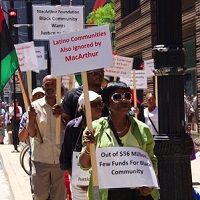