“[Julius] La Rosa was in the Navy when Godfrey heard him sing and invited him to appear on his CBS TV show. After his discharge, Mr. La Rosa became a star of Godfrey’s show from 1951 to 1953, recording several hits including ‘Eh, Cumpari.’ Godfrey liked to exert control over his entertainers, making demands and restricting their outside work in return for exposure on his popular show.” 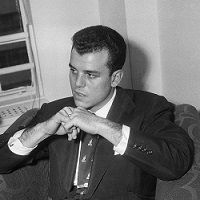