“The singer is an ethnic Tatar, and the song seems to make reference to Soviet abuses of the group in Crimea during World War II. (‘They kill you all and say, ‘We’re not guilty,’’ she sings in the song.) There had been calls for Jamala’s disqualification that cited Eurovision’s rules banning explicitly political songs, but the song survived in part because its references did not directly name specific historical events.” 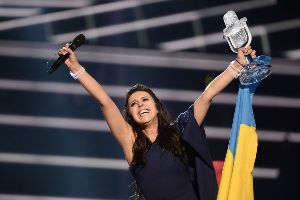