Adam Gopnik considers the British supermarket chain Tesco’s decision to stop making its croissants curved. “Adding an arbitrary national shape to an established one to attempt an entirely English croissant, [some] future scholar will argue, is an affirmation of refusing to be one with Europe. (The crescent, moreover, is the sign of the Islamic empire, and some damp, suspicious kinds will see meaning in that, too.)” 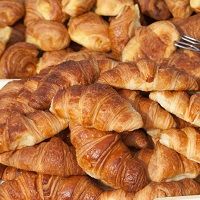