When the fate of Ashraf Fayadh came to the world’s attention, angry tweeters made the obvious comparison and created the hashtag #SaudiArabiaIsISIS. Then a totally offended official from the Saudi Ministry of Justice announced that it would sue anyone who dared equate the Kingdom with the extremist rebels in Iraq and Syria. What did he think would happen? 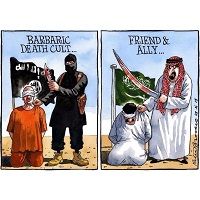