“The museum had just opened when a man and a woman walked in. They were the sole visitors. The woman, described as being in her mid-50s with shoulder-length reddish and blond hair, distracted the a security guard by making small-talk while the man, who appeared to be in his 20s and wore a mustache and glasses, cut the painting from the large frame, leaving the edges of the canvas attached.” 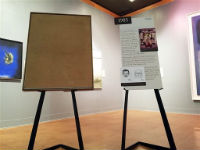