“The small plastic LOVE signs that began popping up on telephone poles around town this spring put a smile on many faces in the Crescent City. Though they occupied the same space as grassroots street advertisements, they didn’t seem to have anything to sell. Because they are generically designed and commercially produced, they didn’t look like conventional graffiti or street art. Because they are rather small and seek to share such a universally upbeat message, they are difficult to dislike … even if they are illegal.” 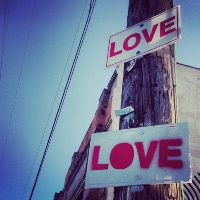