Cello and Kora Epiphany: Sissoko and Segal from Michal Shapiro on Vimeo.

The West African kora is iconic all over the continent, so much so that Africa’s international equivalent of the Grammys, held annually in South Africa, is called the Kora Awards. It has taken a while for this remarkable harp to find a way to an appreciative audience in the west, but over the past few years, more and more classically trained musicians have found a happy symbiosis working with it.

In my last post, I covered the transcriptions of guitarist Derek Gripper who combines both Western notation and the kora repertoire to create his own very personal form of fusion.

In this post, I present one of the oldest and most successful partnerships of that ilk; that of kora master Ballaké Sissoko and cellist Vincent Segal. I have been a fan of their work since their first breakthrough recording, 2009’s “Chamber Music.” It showcased a graceful and seemingly effortless coming together of two traditions. Their 2015 CD “Musique de Nuit” on Six Degrees Records continues this special collaboration, and they were in New York City at the Alliance Française’s Florence Gould Hall as part of their first North American multi-city tour to support it. Here is a taste of what these two sound like in concert, in a song from that CD entitled “Balazando.”

No matter how much I zoomed in on Sissoko’s hands, a frontal view of the kora does not reveal much in the way of his technique. (For that, a side view would have been desirable.) Sissoko is undeniably a master of his instrument, and uses his fingernails to pluck on both the “up” and “down” strokes, much the way a modern Mandigo guitarist might, but it is a technique only recently applied to the kora. The result is impressive velocity, and shimmering cascades of notes.

It is far easier to see Segal in action. In addition to the familiar rich sonorities of the cello, he uses a variety of extended techniques. In the case of the opening salvo of “Balazando,” he slips a noisy little gizmo onto the bridge to approximate the sound of a Gnawan guembri. Then he uses harmonics to float above the density of the kora matrix. On other songs he uses his bow percussively to add rhythmic counterpoint to Sissoco’s syncopations. 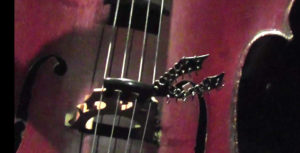 The duo has an exceptional command of dynamics, with both instruments going from a whisper to full throttle as the music demands. The audience that night was entranced as Sissoko and Segal truly lived up to the term “interplay.”

For more about the artists and Musique de Nuit visit: sixdegreesrecords.com/2013/03/ballake-sissoko-vincent-segal/

To see a lovely duet of kora and harp that I caught at the WOMEX in Cardiff,visit: worldmusicandculture.com/catrin-finch-and-seckou-keita-at-womex/

Hello. I'm a musician, writer, painter, producer and videographer. I've been been a professional singer since the age of 11. Between 1995 and 2001 I produced award winning world music compilations for the Ellipsis Arts label, and wrote music … END_OF_DOCUMENT_TOKEN_TO_BE_REPLACED

Western popular music is spreading like kudzu all over the world, and like that devastating if attractive vine, it is obscuring –and in some cases destroying—living things struggling to reach the sun.  For the past 7 years I’ve been shooting video of … END_OF_DOCUMENT_TOKEN_TO_BE_REPLACED