You are here: Home / Archives for Chicago Jazz festival

Roscoe Mitchell onscreen, presiding over The Art Ensemble of Chicago, Pritzker Pavillion Millennium Park Chicago, 8/30/19photo (c) Marc PoKempner The 41st annual Chicago Jazz Festival has come and gone, as I reported for DownBeat.com in quick turnaround. I stand by my lead that the music was epic -- cf. Marc PoKempner's beautiful image of the Art Ensemble of Chicago at Pritzker Pavillion, facing east towards Mecca just before their African percussion-driven orchestral set. And epochal, yes: the Art Ensemble is 50 years old, as discussed … END_OF_DOCUMENT_TOKEN_TO_BE_REPLACED

The 40th annual Chicago Jazz Festival, four days free to all of unfettered, usually joyous music held in beautiful downtown Millennium Park,  started last night with stars of of the local scene celebrating  "Legends and Lions". Add "Ancient to the Future" to set the tone for a weekend of exciting, civically-supported music here -- and similar outpourings of jazz and blues -- America's vernacular musics -- are offered throughout the U.S. this Labor Day weekend. A quick search turns up music fests in the next days from Augusta, Georgia (Labor … END_OF_DOCUMENT_TOKEN_TO_BE_REPLACED 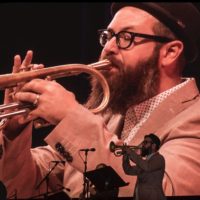 A 40-by-22½-foot LED screen is a dominating feature of the stage in the Pritzker Pavilion of Chicago's Millennium Park, difficult to ignore though many try. Photographer Marc PoKempner does the opposite in his shots from the 39th annual Chicago Jazz Festival: he uses what he (and everybody else) sees to create striking images, in the best tradition of artists in his medium.       howardmandel.com Subscribe by Email | Subscribe by RSS | Follow on Twitter All JBJ posts | … END_OF_DOCUMENT_TOKEN_TO_BE_REPLACED

Chicago's jazz/improvised music scene contains multitudes, last week ranging from the wild yet earnest Liberation Music Collective to veteran piano sophisticate Michael Weiss in trio, as two of Marc PoKempner's photos document (and more of his vision, focused on links between local music and politics -- Obama included -- is on exhibit titled "Harold's Got the Blues" for the next month at the restaurant Wishbone). The Liberation Music Collective, a young ensemble led by bassist-vocalist-lyricist Hannah Fidler and trumpeter-conductor Matt … END_OF_DOCUMENT_TOKEN_TO_BE_REPLACED 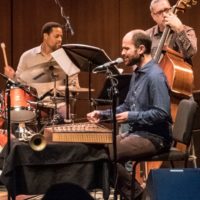 Pianist Randy Weston, a magisterial musician at age 90 inspired by jazz traditions and its African basics, and trumpeter Amir ElSaffar, who has devoted himself to incorporating the Middle East's modal, microtonal maqam legacy into compositions for jazz improvisation by members of his Two Rivers Ensemble, were highlights of last weekend's 10th annual Hyde Park Jazz Festival. Both acts brought influences from afar back home. The two-day fest in the neighborhood soon to host Barack Obama's presidential library focused on local performers … END_OF_DOCUMENT_TOKEN_TO_BE_REPLACED 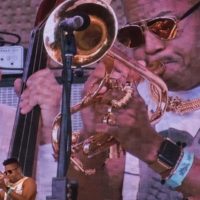 My DownBeat overview of the 38th annual Chicago Jazz Festival, comprehensive as I could make it, didn't go into depth on any of the couple dozen performances I heard from Sept 1 through 4 in downtown Millennium Park and the Cultural Center. So here, with imagery by my photojournalist colleagues and friends Marc PoKempner and Michael Jackson (whose photo of drummer Dave King of the Bad Plus graced that DownBeat review) are some previously unreported details. Tatsu Aoki's Miyumi Project continues to evolve as the Tsukasa Taiko Legacy … END_OF_DOCUMENT_TOKEN_TO_BE_REPLACED 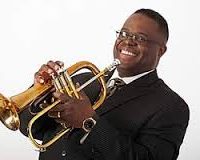 Orbert Davis -- trumpeter, composer and leader of the Chicago Jazz Philharmonic, has been commissioned by the Jazz Institute of Chicago to write and perform a suite about the Great Migration for the 38th annual free Chicago Jazz Festival. "Soul Migration," for octet, will be heard Sept 1 at 8 pm in Millennium Park's Pritzker Pavillion. With the composition in progress, Orbert spoke about it with me at his home studio, demonstrating with some synthesized samples and even improvising a theme. Thanks to Collin Ashmead-Bobbit for recording the … END_OF_DOCUMENT_TOKEN_TO_BE_REPLACED

CareFusion, a global corp. specializing in hospital equipment, has ended its two-year sponsorship of George Wein's New York Jazz Festival and Newport Jazz Festival, and the Chicago Jazz Festival, a day after reporting the retirement of its Chairman and CEO David L. Schlotterbeck, and the first quarter financials of its 2010 fiscal year. The company announced steep revenue losses and plans to cut 5% of its workforce last August; in October, CareFusion recalled 17,000 Alaris PC infusion units, cited by the FDA as a product the use … END_OF_DOCUMENT_TOKEN_TO_BE_REPLACED

Shocking news from Chicago: Richard Daley won't be mayor for life. Yet he's the Windy City's most significant patron of culture, leaving a legacy that ought to -- that is, should, and might -- survive him. Which was unexpected when he succeeded Mayor Harold Washington in 1989, but clear from my visit to Labor Day weekend's 32nd annual Chicago Jazz Festival. … END_OF_DOCUMENT_TOKEN_TO_BE_REPLACED

The Jazz Institute of Chicago's annual club tour is an urban presentation innovation and a treat, revealing an unheralded depth of local audiences, entrepreneurs and artists. On Wednesday night, Dudley Owens blew tenor sax with the largest sound I've heard maybe ever, in combo with an older pianist (sorry I didn't get his name) who played as no one ever told him he couldn't, turning the keyboard inside-out. They completely refreshed the Billie Holiday standard "All of Me" at a friendly, funky hangout called City Life Cocktail Lounge on East … END_OF_DOCUMENT_TOKEN_TO_BE_REPLACED

I'm a Chicago homie -- long removed but never really gone -- so don't expect objectivity, but a recent visit proved my native metropolis is #1 in America and maybe everywhere for its active, creative, meaningful, almost-economically-viable, neighborhood-rooted, exploratory and world class jazz. I say this even as my dearly adopted New York City kickstarts as freshly energized a fall season as any I recall.Jazz is the lifeblood of Chicago in a way it ain't in NYC, at least not right now. Jazz-soul-blues is Chicago's street music. Chicago's … END_OF_DOCUMENT_TOKEN_TO_BE_REPLACED

Buzz about who played live jazz where marked with the hashtage #jazzlives flew throughout cyberspace this weekend  -- catch it all here. The impromptu campaign produced anecdotal evidence that a young and vigorous audience for America's modern vernacular creative music does indeed exist, spreading enthusiastic word via the social network Twitter of sets at Chicago, Tanglewood, Los Angeles (x2), Detroit and Stevens Point (Wisconsin) jazz festivals and gigs in New York, Tokyo, etc,. far and wide. … END_OF_DOCUMENT_TOKEN_TO_BE_REPLACED

All is not dismal in Jazzville: Producer George Wein has found a title sponsor -- CareFusion -- for his jazz festivals in Newport next month and New York City summer 2010. SFJazz has announced a stellar lineup including Ornette Coleman for its fall fest, Oct. 10 - Nov. 21. As Mitch Myers reports from the 13-day 30th annual Festival International de Jazz de Montreal, diversity, provided by living legends and genuinely engaging younger talents, is the key. As James Hale reported from the just ended 11-day-long Ottawa Jazz Festival (as which he … END_OF_DOCUMENT_TOKEN_TO_BE_REPLACED

What if there's more to jazz than you suppose? What if jazz demolishes suppositions and breaks all bounds? What if jazz - and the jazz beyond, behind, under and around jazz - could enrich your life? What if jazz is the subtle, insightful, stylish, … END_OF_DOCUMENT_TOKEN_TO_BE_REPLACED

Reviewing a sleeping giant, ESP Disks before its early '00s revival  Howard Mandel c 1997, published in issue 157, The Wire It was a time before psychedelics. Following the seismic cultural disruptions of the mid '50s, rock 'n' roll had hit a … END_OF_DOCUMENT_TOKEN_TO_BE_REPLACED

[contextly_auto_sidebar id="IFeXJPobvykRyuU4dU68FilRPv0EE8oC"] This is a complete version of the feature on pianist Matthew Shipp I wrote for The Wire, published in February, 1998 Is this the face of New York's jazz avant now? Pianist Matt … END_OF_DOCUMENT_TOKEN_TO_BE_REPLACED

A 1990 interview with drummer Rashied Ali, about his relationship with John Coltrane. … END_OF_DOCUMENT_TOKEN_TO_BE_REPLACED

Miles Davis intended On The Corner to be a personal statement, an esthetic breakthrough and a social provocation upon its release in fall of 1972. He could hardly have been more successful: the album was all that, though it has taken decades for its … END_OF_DOCUMENT_TOKEN_TO_BE_REPLACED