The most important thing I learned in a glorious Humana Festival weekend of theater — six new American plays and a lot of theater geeks—was not in a play at all.

Anne Bogart gave a talk at the Festival. I recommend it to you.

If you too are a contemporary American theater geek, you probably already know her name. As a mere lover of new plays, she was new to me when I heard her talk in 2015, at the same festival.

Here’s what she said last month.

I wrote it down, put it on social media, and added it to my standard presentation deck about how arts and artists should be part of the work of creating healthy and equitable places for people.

At the Festival, for the final weekend of plays, the Encore weekend, a large group of us came from out of town. There were professionals in the field, and many from the media. When you are seeing six plays, two talks, and an awards ceremony in just three days, you start to recognize your team…the group of people on your schedule.

Some of the most memorable things we saw together were not on the performance stage, but about the stage.

At the festival, as you travel from show to show and event to event, with snacks and drinks in between, you often you sit with the same people, not just in the same section of the theater, but also literally next to them. My team included a journalist from Indianapolis and theater pros from Manhattan. We dealt with that space between us, talked about what we were seeing.

At a Festival like this, the community is close, it’s immediate—the space between us is small, and gets progressively smaller.

I appreciated playwright Leah Nanako Winkler’s sly reference to Lyft (importantly not Uber), so I tweeted. And then this happened. 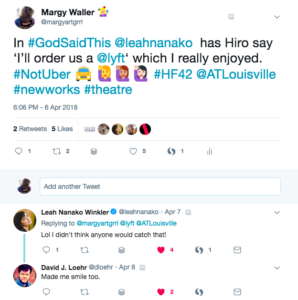 Throughout the Festival weekend, I heard wildly different reports about Evocation to Visible Appearance. It was the last play on my schedule and I’d changed my ticket (twice, it’s a long story), so I wasn’t sitting with my weekend team. 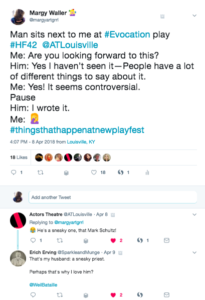 The seat on the aisle next to me was empty when I arrived, but soon a man I didn’t recognize from the weekend sat there. I asked whether he was looking forward to seeing this play. He said, “Yes, I haven’t seen it. People have a lot of different things to say about it.” I agreed, “Yes! It seems controversial.” After a pause, he said: “I wrote it.” Doh.

But no matter, we talked about his place, and his work, and so when I was watching this stunningly beautiful and troubling story unfolding, maybe I understood more than I would have otherwise about how Mark Schultz might be attempting to close some space between people. And I got to share my goosebump reaction at the end with him.

These are things that happen when the Festival company understands it can (and should) create a community of everyone involved – and that includes, and indeed requires, the audience too. #HF42

Margy is an advocate for creating community through the arts. She is a Senior Fellow at Topos Partnership (a national strategic communications organization), founder and Serendipity Director of Art … END_OF_DOCUMENT_TOKEN_TO_BE_REPLACED

The Bright Ride is an actual event that I dreamed up and organized with friends. People decorate their bikes (and themselves) with lights and other things that sparkle and glow, and ride … END_OF_DOCUMENT_TOKEN_TO_BE_REPLACED