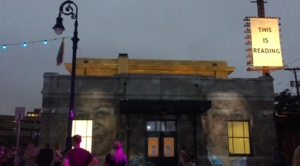 In mid-July, I traveled to Pennsylvania to see a show. It was straight-up MAGIC. I can’t stop thinking about it.

This is Reading is a transmedia production about the people and times of Reading, Pennsylvania.

Reading has been through the boom and the bust. It’s the city that gave the name to Reading Railroad—of Monopoly fame, yes. The Reading Company was the biggest corporation in the world in 1871.

But you can’t get there by train now. Passenger travel to Reading’s Franklin Street Train Station ceased in 1981. My trip included a plane, a train, and then a car ride from Lancaster with my friend Kathryn.

Back in 2011, the local arts council invited me to do a workshop in Reading about how to build broad support for the arts. So I knew a little about the city before this trip. It helps to have a sense of the place to understand what’s happening there this July.

On my earlier trip, I met Mayor Tom McMahon who shared that he was crushed by the news that Reading had the largest percentage of residents with income below the federal definition of poverty, $18,530 for a family of 3. The 2010 census info had been highlighted by a story in the New York Times not long before.

Playwright Lynn Nottage read that article in the Times. And she started spending time in Reading—talking with residents about the city, their memories, what’s changing, and so on.

Reading, Pennsylvania grew as coal was transported by the Reading Railroad to Philadelphia and beyond, and with manufacturing. Beginning in the 1940s, population declined as manufacturing did too. Plants closed, unemployment went up, and jobs paid less.

But more recently, population has increased, primarily because there are a lot of new Hispanic residents. Between 2000 and 2010, the percentage of residents of Hispanic origin increased from 37 percent to 58 percent. Reading is showing the rest of us our future as a country, when we will be a majority minority nation.

Lynn’s interviews capture these demographic shifts and Reading’s evolution from a thriving place with a busy downtown of shops and restaurants and offices to a place without passenger railroad service and vacant lots where historic buildings used to stand. She wrote the Pulitzer Prize winning play, Sweat, about these changes.

She didn’t want to take the stories without giving something back, it seems. Lynn has said she doesn’t want to be ‘a carpetbagger’, so with partners, she’s created this magical multi-media, multi-platform gift to Reading.

This is Reading presents the stories—Lynn and her many collaborators share and lift up their words in this installation in and around Reading’s Franklin Street Train Station.

What makes the magic? The artist collaborators went deep into the city. The people of Reading told their own stories. The artists turned those stories into this authentic and hopeful experience. They did what only artists can do. THIS is creative placemaking. THIS THIS THIS is the real deal.

The words of the people of the city are beautifully and authentically shared in so many media. Every single aspect is jaw-droppingly beautifully rendered. The dancing brought me to tears. The audience of mostly Reading residents is so proud to be there, smiling, pointing, talking. The producers made sure that residents got tickets, delivering them in person to people they were afraid might not learn of the show through traditional marketing. All of the tickets were free. When the first two weekends of six shows sold out quickly, they extended the show for a third weekend. The whole audience dances together with the artists at the end of the show.

The facts about Reading are hard. These stories of Reading are magically uplifting and joyous.

This video from the end of the show was shot and shared by the playwright. It’s a perfect capture of SPIRITS BEING RAISED.

Note: This writing can’t begin to do justice to the authenticity and energy and creativity of this experience.

THIS IS READING, a dynamic site-specific multimedia installation blending live performance and visual media, will occupy the historic Franklin Street Railroad Station in Downtown Reading, re-animating the long vacant building.  Using as its foundation the challenges, and triumphs of people living in and around Reading, Pa., This is Reading will weave their individual stories into one cohesive and celebratory compelling tale of the city.

Margy is an advocate for creating community through the arts. She is a Senior Fellow at Topos Partnership (a national strategic communications organization), founder and Serendipity Director of Art … END_OF_DOCUMENT_TOKEN_TO_BE_REPLACED

The Bright Ride is an actual event that I dreamed up and organized with friends. People decorate their bikes (and themselves) with lights and other things that sparkle and glow, and ride … END_OF_DOCUMENT_TOKEN_TO_BE_REPLACED