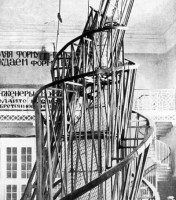 Clocking in at a mere seven hundred pages, give or take, The Communist Movement at a Crossroads: Plenums of the Communist International’s Executive Committee, 1922-1923, the eighth volume of John Riddell's awesome edition of documents from the Comintern in Lenin's time, will be out later this year. (As with everything in the Historical Materialism book series, it will then be issued in paperback … END_OF_DOCUMENT_TOKEN_TO_BE_REPLACED

Quick Study is a scrapbook of clippings and notes on cultural, political, and ludic matters. It is written, assembled, curated, and otherwise promulgated by Scott McLemee with the generous support of ArtsJournal. … END_OF_DOCUMENT_TOKEN_TO_BE_REPLACED