You are here: Home / Archives for Muhal Richard Abrams 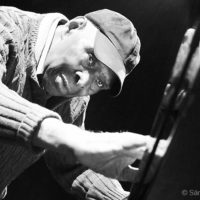 Photographer-writer-author Ken Franckling has painstakingly compiled a compendium of more than 400 jazz artists and associates from around the world who died in 2017, with links to obituaries of most of them. Posted at JJANews.org. It's a striking document and useful resource, though Franckling says, sadly, "The list seems to get depressingly longer each year." Maybe that's because jazz itself -- at least as so recorded and promoted -- is now more than 100 years old and the post-WWII generations that gave the art form its fervent … END_OF_DOCUMENT_TOKEN_TO_BE_REPLACED

There's not much time left, so here are three of my best memories of live music over this crazy year, and a couple handfuls of favorite recordings that promise to be listenable for quite a while forward --  … END_OF_DOCUMENT_TOKEN_TO_BE_REPLACED

The AACM -- Association for the Advancement of Creative Musicians -- continues after 45 years to encourage highly original, edgy and exciting artists -- as I detail in my new City Arts column. Examples in New York City: reedist/composer Henry Threadgill's Zooid performs tonight and tomorrow at Roulette; trumpeter Wadada Leo Smith's 22-piece Silver Orchestra and the duo of keyboardist-singer Amina Claudine Myers and drummer Reggie Nicholson are the bill for the AACM-New York''s concluding concert of its fall 2010 season on … END_OF_DOCUMENT_TOKEN_TO_BE_REPLACED

Why isn't the amazing current generation of creative (jazz) musicians better known? Maybe because major artists of the not-so-distant past are practicing the art form at splendid peaks, overturning clichés about dwindling powers of octogenarians. Read my column in City Arts New York for a report that touches on Sonny Rollins, Roy Haynes and Muhal Richard Abrams, who tower over the start of the fall 2010 season. howardmandel.com Subscribe by Email or RSS All JBJ posts … END_OF_DOCUMENT_TOKEN_TO_BE_REPLACED

As a teenager in pursuit of the avant garde, I took tenor saxophonist Fred Anderson, who died June 24 at age 81, as a hero upon first hearing him in 1966. It was at a Unitarian Church-run coffee house in downtown Evanston near Northwestern U., and attention clearly had to be paid to the long, fierce, unreeling, knotty improvisations Anderson delivered in an ever-more hunkered-down posture as the evening went on. There was an unremitting sense of urgency, sincerity and humility to what he was saying on his horn, spelled by startling outbursts … END_OF_DOCUMENT_TOKEN_TO_BE_REPLACED

Just in --  Muhal Richard Abrams conducting the Jazz at Lincoln Center Orchestra, and Yusef Lateef on tenor sax with percussionist Adam Rudolph, fine performance photography by Frank Stewart from the National Endowment for the Arts' Jazz Masters concert. My post on the concert is here, and the images are below -- … END_OF_DOCUMENT_TOKEN_TO_BE_REPLACED

Jazz, defined by creativity, pushes boundaries -- a fact alluded to and demonstrated by two of the new NEA Jazz Masters at the gratifying if lengthy ceremony and concert held at Rose Theater of Jazz at Lincoln Center on Tuesday, Jan 12. Muhal Richard Abrams and Yusef Lateef were inducted into the canon that now recognizes 114 musicians and advocates of what House Congressional Resolution 57 (passed with Senate concurrence in 1987) calls "a rare and valuable national American treasure." Both men performed in ways that draw from but aren't … END_OF_DOCUMENT_TOKEN_TO_BE_REPLACED

What if there's more to jazz than you suppose? What if jazz demolishes suppositions and breaks all bounds? What if jazz - and the jazz beyond, behind, under and around jazz - could enrich your life? What if jazz is the subtle, insightful, stylish, … END_OF_DOCUMENT_TOKEN_TO_BE_REPLACED

Reviewing a sleeping giant, ESP Disks before its early '00s revival  Howard Mandel c 1997, published in issue 157, The Wire It was a time before psychedelics. Following the seismic cultural disruptions of the mid '50s, rock 'n' roll had hit a … END_OF_DOCUMENT_TOKEN_TO_BE_REPLACED

[contextly_auto_sidebar id="IFeXJPobvykRyuU4dU68FilRPv0EE8oC"] This is a complete version of the feature on pianist Matthew Shipp I wrote for The Wire, published in February, 1998 Is this the face of New York's jazz avant now? Pianist Matt … END_OF_DOCUMENT_TOKEN_TO_BE_REPLACED

A 1990 interview with drummer Rashied Ali, about his relationship with John Coltrane. … END_OF_DOCUMENT_TOKEN_TO_BE_REPLACED

Miles Davis intended On The Corner to be a personal statement, an esthetic breakthrough and a social provocation upon its release in fall of 1972. He could hardly have been more successful: the album was all that, though it has taken decades for its … END_OF_DOCUMENT_TOKEN_TO_BE_REPLACED