You are here: Home / Archives for AACM If all "jazz" shares a single trait, it's that nothing will stifle it. Adjusting to covid-19 strictures, Chicago (just for instance) in the past two months has been site of: A stellar Hyde Park Jazz Festival;Herbie Hancock's homecoming concert at Symphony Center;audiences happily (for the most part - no reported incidents otherwise) observing appropriate covid restrictions in intimate venues where I've been -- including Constellation, the Jazz Showcase, Hungry Brain and Fitzgerald's; a heartening multi-kulti success -- Japanese taiko … END_OF_DOCUMENT_TOKEN_TO_BE_REPLACED

Lollapalooza 2021 had some 385,000 attendees (without significant Covid-19 outbreak, fortunately) but featured little of host Chicago's indigenous talent or styles. And that's just wrong, declared Department of Cultural Affairs and Special Events commissioner Mark Kelly, launching the month-long Chicago in Tune "festival" at a reception August 19. Here's the still-evolving event calendar of hundreds of local music performances -- of every conceivable genre, free and ticketed, outside or in, most requiring vax proof and/or masks -- … END_OF_DOCUMENT_TOKEN_TO_BE_REPLACED 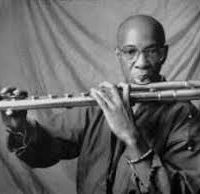 The deaths of multi-instrumentalist Joseph Jarman, best known as the face-painted shaman of the Art Ensemble of Chicago, and Alvin Fielder, re-conceptualizing drummer, remind us that artists' contributions to music extend beyond recordings and awards. Read my essay at NPR Music, commissioned by Nate Chinen of WBGO, on the enduring legacies of Jarman and Fielder, both founding members of the still thriving Association for the Advancement of Creative Musicians (AACM) NY and Chicago). … END_OF_DOCUMENT_TOKEN_TO_BE_REPLACED 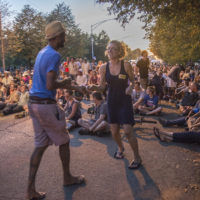 Chicago's Hyde Park Jazz Festival in the first days of fall (Sept. 23 & 24th) which were unusually hot, is an exceptional event, curated for creative artistry, local and otherwise, drawing a highly diverse crowd to a fair that mixes popular and specialized performances at a range of boutique venues. Produced by an independent 501c3, the 11-year-old Hyde Park Jazz Festival receives some support from the University of Chicago's Office of Civic Engagement, and has co-founders in principals from the Hyde Park Jazz Society but relies … END_OF_DOCUMENT_TOKEN_TO_BE_REPLACED 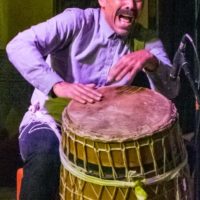 There are good arguments for building venues just for jazz. But speaking of arts communities in general: Most are moveable feasts, fluid, transient, at best inviting to newcomers to the table. It's demonstrable that when jazz players and listeners alight at all-purpose spaces such as Chicago's Alhambra Palace, where Hot House produced the trio of saxophonist David Murray, bassist Harrison Bankhead and percussionist Kahil El'Zabar  on Monday, Dec. 12, or The Promontory in Hyde Park, where flutist Nicole Mitchell, cellist Tomeka Reid and … END_OF_DOCUMENT_TOKEN_TO_BE_REPLACED

In his first college teaching job at Wilson Junior College during the early 1960s, trumpeter Dick Wang encountered a cadre of exploratory young Chicago musicians who would soon form the AACM (Association for the Advancement of Creative Musicians). He encouraged them. He introduced Roscoe Mitchell, Joseph Jarman and Malachi Favors, Anthony Braxton, Henry Threadgill, Ari Brown and others to the writings of Paul Hindemith and Arnold Schoenberg; he instituted weekly a "head-knocking" jam sessions for these players, and cheered on their efforts to … END_OF_DOCUMENT_TOKEN_TO_BE_REPLACED

Hank Shteamer, writer-on-music at Time Out New York and blogger at Dark Forces Swing Blind Punches, writes "I am not a jazz journalist" in response to "The State of Jazz Journalism Now and Immediate Prospects" town hall meeting at the Jazz Journalists Association's "New Media for New Jazz" conference yesterday (Jan 8). He doesn't deny that he loves jazz and writes about it, but considers putting the title off an insistence for diversity. I'm president of the JJA and a jazz journalist -- among other things. My response to him follows; not … END_OF_DOCUMENT_TOKEN_TO_BE_REPLACED

The AACM -- Association for the Advancement of Creative Musicians -- continues after 45 years to encourage highly original, edgy and exciting artists -- as I detail in my new City Arts column. Examples in New York City: reedist/composer Henry Threadgill's Zooid performs tonight and tomorrow at Roulette; trumpeter Wadada Leo Smith's 22-piece Silver Orchestra and the duo of keyboardist-singer Amina Claudine Myers and drummer Reggie Nicholson are the bill for the AACM-New York''s concluding concert of its fall 2010 season on … END_OF_DOCUMENT_TOKEN_TO_BE_REPLACED

As a teenager in pursuit of the avant garde, I took tenor saxophonist Fred Anderson, who died June 24 at age 81, as a hero upon first hearing him in 1966. It was at a Unitarian Church-run coffee house in downtown Evanston near Northwestern U., and attention clearly had to be paid to the long, fierce, unreeling, knotty improvisations Anderson delivered in an ever-more hunkered-down posture as the evening went on. There was an unremitting sense of urgency, sincerity and humility to what he was saying on his horn, spelled by startling outbursts … END_OF_DOCUMENT_TOKEN_TO_BE_REPLACED

Steve Colson, pianist/composer and band leader, with vocalist Iqua Colson --  a couple  members of American experimental music's cutting edge AACM for some 35 years --  give a rare performance quartet Saturday night (Feb 6) at NYC's Thalia theater in Symphony Space. Everyone who attends gets the Colsons' new CD, The Untarnished Dream, for free. One-time promotion? Start of a trend? Acceptance of reality? … END_OF_DOCUMENT_TOKEN_TO_BE_REPLACED

Bob Koester, owner-operator of Delmark Records and the Jazz Record Mart, is celebrated in the New York Times' Arts & Leisure section today. He's documented and marketed South and West Side soul, AACM innovation, trad jazz and the Mississippi Delta blues revival. I'm among the many music fans who grew up in his sway -- and include my 12-best list of albums Koester brought to life. … END_OF_DOCUMENT_TOKEN_TO_BE_REPLACED

Commenting after my Cecil Taylor postings, correspondent "Jake" reports Alex Ross "publicly champions Cecil Taylor . ..  lists the rather obscure FMP big band record "Alms/Tiergarten (Spree)" as among his favorite pop/jazz recordings and wrote an appreciation of the maestro (paired with Sonic Youth) in The New Yorker way back in '98 . I wish more classical critics and fans would deal with avant-garde jazz and vice-versa. These musics have much in common and it seems a bit arbitrary to choose one absolutely over the other. Howard, I'd be curious … END_OF_DOCUMENT_TOKEN_TO_BE_REPLACED

What if there's more to jazz than you suppose? What if jazz demolishes suppositions and breaks all bounds? What if jazz - and the jazz beyond, behind, under and around jazz - could enrich your life? What if jazz is the subtle, insightful, stylish, … END_OF_DOCUMENT_TOKEN_TO_BE_REPLACED

Reviewing a sleeping giant, ESP Disks before its early '00s revival  Howard Mandel c 1997, published in issue 157, The Wire It was a time before psychedelics. Following the seismic cultural disruptions of the mid '50s, rock 'n' roll had hit a … END_OF_DOCUMENT_TOKEN_TO_BE_REPLACED

[contextly_auto_sidebar id="IFeXJPobvykRyuU4dU68FilRPv0EE8oC"] This is a complete version of the feature on pianist Matthew Shipp I wrote for The Wire, published in February, 1998 Is this the face of New York's jazz avant now? Pianist Matt … END_OF_DOCUMENT_TOKEN_TO_BE_REPLACED

A 1990 interview with drummer Rashied Ali, about his relationship with John Coltrane. … END_OF_DOCUMENT_TOKEN_TO_BE_REPLACED

Miles Davis intended On The Corner to be a personal statement, an esthetic breakthrough and a social provocation upon its release in fall of 1972. He could hardly have been more successful: the album was all that, though it has taken decades for its … END_OF_DOCUMENT_TOKEN_TO_BE_REPLACED