Because seasonal change tends to be pretty subtle in Southern California, summer doesn’t officially begin for me until the first show at the Hollywood Bowl. Last night’s performance was dedicated to retro-minded guy-girl duos: The Bird and the Bee, She & Him, and the Swell Season. The evening, at the end of what was by far the hottest weekend of the year, was very fine without being especially surprising. 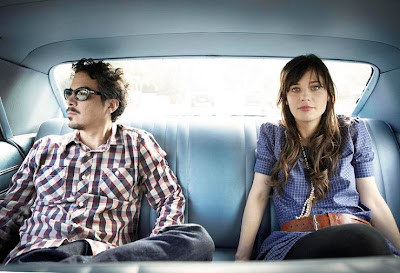 The opening band at Bowl shows has to perform while it’s still quite light out, and somehow hard to sink into the performance. The Bird and the Bee played with spirit, but it didn’t make much impression despite tuneful songs and some hot dancers. (I have not really forgiven them for dedicating an entire album to Hall and Oates and kicking off that hipster revival. Though their cover of “Sarah Smile” — a song my wife Sara was tormented with as a kid — was not bad.)

Similar but with more impact was She & Him. As much as I want to like the indie-minded, John Fahey-loving, integrity-rich M. Ward, his records are just, with a few exceptions, too introspective for me. But when he becomes Matt Ward and plays with actress Zooey Deschanel, it’s light, frothy and winning — retaining some of his vintage cool — and last night was better than the pretty decent LPs led me to expect.

The played songs like NRBQ’s “Ridin’ in My Car,” the bouncy “In the Sun,” “Change is Hard,” and a smokin’ cover of Smokey Robinson’s “You Really Got a Hold on Me.” Ward played acoustic guitar as well as what looked like a ’50s Gretsch (with a whammy bar) but which turns out to be a Gibson Johnny A model — he really made it sing and was far more fun than you’d expect from his dour photos. But the show was more about Zooey’s voice and stage presence.

The rockabilly “Roll Over Beethoven” and a torchy “I Put a Spell on You,” which concluded their set, may’ve been the best thing they played.

(She & Him came together when the two adapted Richard and Linda Thompson’s “When I Get to the Border,” which is here on youtube.)

I’d expected She & Him’s lightly ironic, stylized trip into the past to the eve’s highlight, but The Swell Season, the Irish-Czech duo from the movie “Once,” won me over.

First, a question: Why is so much Celtic rock so bombastic, and why do the most ironic people in the world write and sing songs that are so deadly earnest? (I ask this as someone who is half Irish and spend a lot of time looking for contemporary Gaelic music that is not embarrassing.) There were moments of Celtic bombast in last night’s set, but only a few. Glen Hansard, the former busker whose band, The Frames, interests me not at all, is either the most sincere successful musician in the world or the best actor-singer the world has ever known. He knocked me out.

Part of what I like about the group is its dedication to the folk repertoire; Hansard sang a Tim Buckley song with a Jeff Buckley bridge and made both work. Strumming a battered acoustic guitar with a hole in its top, he sang, with ex Marketa Irglova singing harmony and sometimes accompanying on piano. (The one song she sang more or less solo was beautiful.) You’ve seen the movie, you know what they do, and you know his bashful charm and ability to summon a mix of early Marvin Gaye and early Van Morrison.

Good music is often a mystery, but I am still amazed: How many times did I hear Van’s “Into the Mystic” in college, out the windows of dorm rooms, in candle-lit co-ed’s rooms, and played at parties by hippie bands — and yet The Swell Season and its horn section made me feel I was hearing it for the first time.

Here is some information on my book, which Yale University Press published in 2015. (Buy it from Powell's, here.) Some advance praise: With coolness and equanimity, Scott Timberg tells what in less-skilled hands could have been an overwrought horror story: the end of culture as we have known … END_OF_DOCUMENT_TOKEN_TO_BE_REPLACED