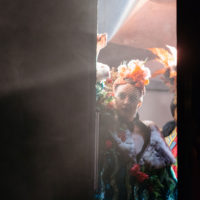 ‘You must have been quite an odd duck as a boy,’ I said to Barry Humphries, as the entertainer described his unusual devotion to Berlin cabaret artists, fostered in stuffy suburban Melbourne. ‘Yes, I was,’ he replied. He gave me a look. ‘I expect you were too.’ Guilty as charged: part of my duckery was also an interest in the sauce and swoon of Weimar performance – from Cabaret to Brecht/Weill … END_OF_DOCUMENT_TOKEN_TO_BE_REPLACED

This is what theatre and dance audiences do: we sit in the dark, watching performances. And then, if it seems worth it, we think about what we've seen, and how it made us feel. The blog should be a conversation, so please comment on the posts and add your thoughts. You know what I've always … END_OF_DOCUMENT_TOKEN_TO_BE_REPLACED