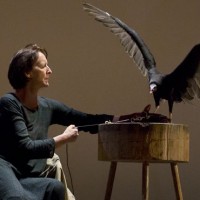 A comment on the Guardian’s review of The Testament of Mary, currently at London's Barbican, described Fiona Shaw’s performance as ‘19th century’ in style. I’m not sure the term fits such an arrestingly contemporary performer – I suspect they just meant ‘big’. Which it no doubt is. Shaw, like Simon Russell Beale, whose King Lear in London was recently broadcast in the NT Live series, is a singular … END_OF_DOCUMENT_TOKEN_TO_BE_REPLACED

This is what theatre and dance audiences do: we sit in the dark, watching performances. And then, if it seems worth it, we think about what we've seen, and how it made us feel. The blog should be a conversation, so please comment on the posts and add your thoughts. You know what I've always … END_OF_DOCUMENT_TOKEN_TO_BE_REPLACED