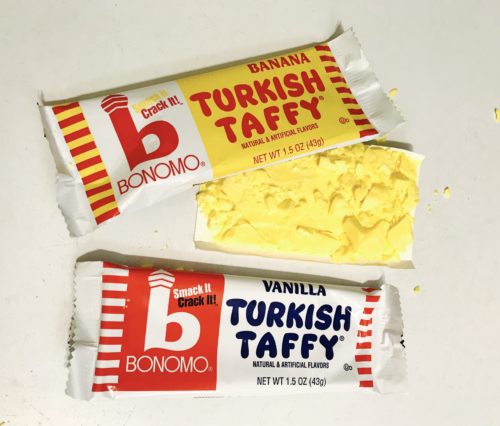 Oh oh no, it’s Bonomo. Not the wrapper I remember.

The polite ones pretend to remember, because they don’t want to show they aren’t down with your age.

“Down with” is their age.

And the smart ones know what you’re talking about, though their eyes twitch as they grin.

Old candy is what we liked when we were young candy. No one warned me not to take candy from strangers because I was a boy. Anyone who passed a piece of fudge into my small, sweaty hand was a friend, whether or not I paid with a Buffalo nickel or Mercury dime. Sweet boys like candy — though no one could ever, ever know about my chewy center.

The vintage-candy vault is a Brooklyn cliche, like stoop ball, stickball, new chalk-pink Spaldings (Spawl-DEENS) down the grate. I’ve written before that Ruth Bader Ginsburg and I went to the same school, P.S. 238, and she too must know how childhood glows and shrivels, seen and smelled through chalk dust and sudden tulips.

All I have to do, Sugar Daddy in my hand, is look at my present body, the one Dr. Reinstein almost threw away.

The family quack couldn’t figure why a 7-year-old was pissing every hour and fell asleep before Superman or Ernie Kovacs.

Insulin saved me, but after I began injecting, I was told I could, and must, eat something sweet in the afternoon, my “4 o’clock snack.” Half a Good Humor from the truck was allowed, which explains a lot about me now.

So I’d walk to a weekend matinee at the Kingsway on Kings Highway, never as grand as all that. Let’s try Gidget, 1959. As usual, I had bought a Bonomo Turkish Taffy at Seal’s Candy Store on Friday and put it in the freezer.

The aural fantasy I allow myself is one of random lightning claps coming from all parts of the loge and balcony. We’d take the flat treat in our palms and with whatever kiddie muscle we could muster, slam it on the varnished arm of a dirty velveteen seat. No actual friend had to tell me how to do it:

Bonomo edges felt like razors in my mouth until they softened, as I later hoped all sharpness would. The flavor, always vanilla, escaped me, though the cracking sound stays, the way I hear the name of Gidget’s beautiful boyfriend, “Moondoggie,” as it turned into “Jeffrey” when summer was over — the first time I heard my name in another place. 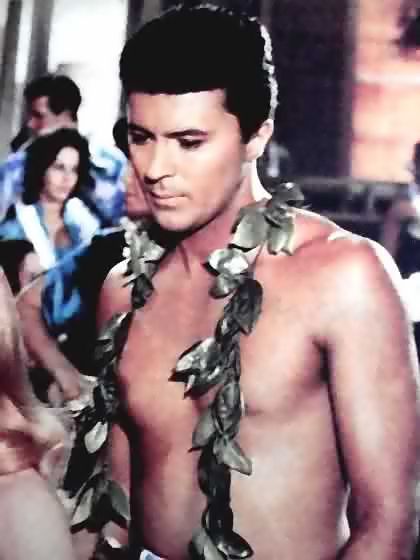 “Paraphilia” refers to a “disordered” attraction to something. Sea urchin? Sautéed brain? None of them plays out, and I never could draw a line of any color between appetite and lust, especially when hunger is the motor.

Six decades later, my palms seem the most preserved part, though they’ve held and shaken their share.

I did it again, look above. No Gidget spirit rose up near the covered tub in the kitchen, on which the deed was done. Its enamel has worn to fine, clean sandpaper, though it still fills.

Children are occasionally moved to show pleasure as they eat, but old bodies doing so are suspect. Neither athletic chewing nor tactile affection pass muster at table when we’re involved, though a cocktail or two may get past the censors because a sip by nature appears innocent. One ginned olive may be inserted between our lips, but any more will send up flags, especially if spotted hands and limp wrists are involved.

Will I slip on a lemon peel or glazed berry as I step back from the table to get my bearings in the din, looking for a way out? Either could have me down for the count. Slow yet agile is the goal, never “spry,” a word best left for frying spring chicken. No, I don’t need help, thanks…

“Economy Candy” could be my drag name, though the store on Rivington Street, which opened 10 years before my birth, wouldn’t care less. It’s where I went to find my Bonomos and other minor madeleines, most of them on the 99-cent table. 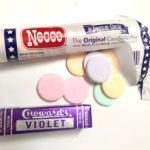 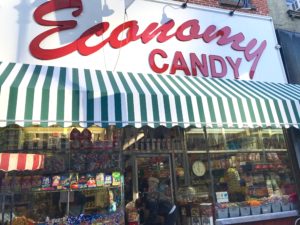 The few youngsters I saw, led inside by google-eyed parents, looked bored by the hoard.

“Necco, the Original Candy Wafer, an American Classic since 1847,” exactly a century before I was born. Best used to keep restaurant tables from wobbling. “Choward’s Violet, a Delicious Confection made in the village of Bellport, N.Y.,” invented by Charles Howard, who envisioned during the Great Depression “a unique and different flavored candy.”

I happened to drive by the Bellport address soon after: the factory has dwindled to an office with one car outside. So maybe I’ve bought old stock, or that which is made in a unique and different country. But no matter, because the mock-violet fume of this concrete delicacy will outlast time.

“You’ll probably die 10 years early,” the child was told by a mixed assortment of adults. Earlier than what, I wondered, though I knew they thought I was damaged goods. They almost convinced me.

I guess those health experts are late, now.

The moral to this story is an imaginative choice any person of my background and inclination has to make. Do you want to die collapsing during a march for equality and freedom, in the course of a bout of extravagant sex, or with a piece of the best possible sweetness just about to enter your wide-open mouth?

The media make a potentially fatal mistake by dividing arts coverage into high and low, old and young, and by trivializing our passionate attraction to things. In Out There I propose that all creative expression has the potential to be both … END_OF_DOCUMENT_TOKEN_TO_BE_REPLACED