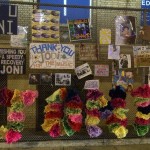 The tributes to Joni Mitchell continue outside the SFJAZZ Center (Photo: Chloe Veltman)

Judging by the floral and handwritten tributes adorning the fence across the street from the SFJAZZ Center in Hayes Valley, San Francisco, you’d think Joni Mitchell had passed away.

The great vocalist and songwriter is still, of course, very much alive, though was unable to attend SFJAZZ’s spangly lifetime achievement award celebrations last night for health reasons.

Mitchell had planned to be at the event before falling ill and ending up in a Los Angeles hospital on March 31. SFist reports that the circumstances surrounding the singer’s health remain undisclosed.

In any case, the spirit of Mitchell’s music was very much alive at the jazz center last night.

Guest artists including Kris Kristofferson, Joe Jackson, Patti Austin, Laurie Antonioli, and Kurt Elling performed interpretations of Mitchell’s songs. The versions ranged from the fairly straight forward, like Kristofferson’s unadorned, heartfelt take on “A Case of You”, to Jackson’s playful-if-not-quite-locked-in boogie woogie piano interpretation of “Big Yellow Taxi.” Vocalist/pianist Judith Hill totally stole the show with her lucid, sparkling version of “River.” That song will never be the same for me again.

The most important idea I took away from the show is a sense of the intersection between Mitchell’s folk stylings and jazz.

I must admit that I was initially confused as to why a jazz organization would want to honor a folk/folk rock artist, even though Mitchell did go through a “jazz phase” with her 1979 collaboration with jazz artist Charles Mingus. And when I listen to recordings of some of her songs, with their far-reaching, ethereal harmonies and her particular brand of “scat”, the link between jazz and Mitchell feels somewhat organic.

But it was the SFJAZZ Collective’s performances of “Both Sides Now” and “Goodbye Porkpie Hat” that really sealed the connection for me. The Collective is a group of top-tier musicians assembled each season to be “in residence” at the Center by a guest artistic director. That position this year falls to saxophonist Miguel Zenon. Trumpeter Avishai Cohen played the latter tune, recorded by Mingus in 1959, with an extremity of emotion, digging into the very top end of the trumpet’s register. I was spellbound.

Mitchell sang: “Don’t it always seem to go, that you don’t know what you’ve got till it’s gone.” Thankfully, the folks at SFJAZZ know very well what we’ve got. I’m so glad they decided to celebrate Mitchell while she’s still around. I only wish, like everyone else, that she could have joined us in person. I hope she gets out of hospital soon.