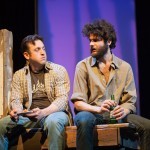 Adam Magill as Con and Joseph Estlack as Dev in SF Playhouse’s production of “Stupid Fucking Bird,” an adaptation of Anton Chekhov’s “The Seagull” by Aaron Posner. (Photo: Jessica Palopoli)

The dramatist’s mostly cosmetic updates makes Chekhov’s angsty drama more approachable for modern audiences albeit in a thoroughly superficial way. There’s some good acting and a fluid mise en scene to SF Playhouse‘s current production directed by Susi Damilano. But I don’t think Posner’s version, which hews fairly closely to the original in terms of narrative — though bafflingly avoids the protagonist’s suicide —  improves in any way upon Chekhov’s drama.

Yet the play is undeniably entertaining (which cannot always be said of Chekhov productions, especially since so many of them suck the humor dry.) And in one way in particular — its volatile breaking of the fourth wall — I was sucked in by the show.

Chekhov’s earlier plays, such as “The Seagull,” include things like asides. “The Seagull” even has one moment where a character steps completely out of the scene to talk directly to the audience. The effect is quite startling in an otherwise realistic set-up where characters speak amongst themselves without consulting with the audience.

“DORN. I may have lost my judgment and my wits, but I must confess I liked that play. There was something in it. When the girl spoke of her solitude and the Devil’s eyes gleamed across the lake, I felt my hands shaking with excitement. It was so fresh and naive. But here he comes; let me say something pleasant to him.”
In “Stupid Fucking Bird,” it’s Con, Posner’s update on Chekhov’s troubled young playwright protagonist, Konstantin, who is responsible for the most arresting piece of fourth wall demolition. Adam Magill’s Con, distraught by his paramour Nina’s lack of interest in him, leaps up and asks — no, demands — that the audience help him figure out how to win her over. And he won’t take silence for an answer.
I usually find these sorts of direct audience addresses to be a bit painful. People don’t speak up. Or if they do, it’s the one drunk guy in the front row who says something idiotic. But in this case, Magill, who strikes me from this one production as a consummate improv artist, compelled people all over the house to speak up and actually share useful suggestions for how to get the girl. Some of these were funny (At one point someone yelled “Shave!” which drew giggles because the young actor is heavily bearded. Magill responded without missing a beat that someone tells him to crop his beard at nearly every performance.) But other catcalls were in earnest. Someone’s advice to “tell her you love her!” sent the actor bounding off the stage with a determined “Yes!” That’s all the encouragement Magill’s Con needed in the end.
Outside of standup comedy and British pantomime, where performers routinely ask audience members to shout a rote line at the stage in response to a stock question (Q: “Where is he?” A: “He’s behind you!”) I have never seen such a real, two-way conversation take place between the stage and the stalls in a serious dramatic work.
It’s the one and only time that this sort of appeal happens in the play, and it works surprisingly well, dramatically. What’s more, it takes Chekhov’s breaking out of realism to a new and strange extreme.