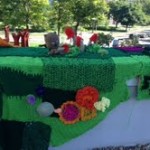 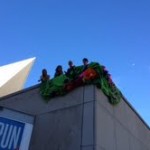 Quite a few of the larger cities in the United Sates have their resident “knitting bombers” — that is, groups of hipsters who love to knit/crochet and spend time adorning various urban landmarks with bits of colorful wool.

But it’s not often the case that such a group will be embraced by major cultural institutions. In Denver, however, the needle wielding divas of the anachronistically-named Ladies Fancywork Society were up bright and early this morning adorning one side of the city’s premiere arts institution, the Denver Art Museum, with an enormous, crocheted garden landscape.

I went by on my bike at around 8am to watch the members of the LSF installing their latest creation as part of the museum’s current multifaceted “Spun” show dedicated to exploring fabric-based arts of all kinds.

The LSF vertical wool garden is made up of assorted patches of green crochet embellished with imaginative flora and fauna, including playfully phallic-looking toadstools. It took four knitters around two months to create the gorgeous piece and the planning extends much further back.

The garden is vividly eye-catching on the museum wall. I love the brilliant colors and cookie-ness of it. I also appreciate the way in which members of the public who attend the museum’s Final Friday event at the end of September will be able to take pieces of the garden, which will be deconstructed after a month or so on view, home for free. Nice.

I am coveting one of those phallic toadstools, myself.

I wonder, though, how the meaning of this kind of work changes when it goes from being the kamikaze creation of a group of underground handicrafters to being appropriated by a major arts institution?

I mean, It’s one thing for an enormous woolly garden to appear out of nowhere on the side of a building in an unregulated way, but quite another when the activity is sanctioned.

So far, the LFS has been involved with DAM in a variety of ways:

In March of 2010, LFS was invited to tag the massive bovine art installation outside the museum (“Scottish Angus Cow and Calf by Dan Ostermiller”.) Here’s a link to a photo of the escapade on the LFS site. And LFS has also done installations to promote “Spun” at locations such as IKEA and the Cherry Creek Mall. Here’s a twitter link to LFS members installing their work at IKEA.

I’ll be curious to see how the collective’s relationship with the museum evolves. I am in favor of the collaboration, though the promotional work gives me pause for thought. I hope that the LFS will continue to produce work in a more spontaneous way all around the city and beyond and that the museum will continue to do the important work of finding other unusual, locally-based individuals and collectives to work with on thoughtful-delightful projects.

PS If you’re in Denver this Friday night and at a loose end, head to the latest “Untitled” arts soiree at DAM to hear LFS members talking about their process at 6:45pm and lead a public crocheting “knit tag” workshop.