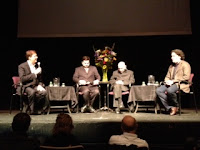 Cal Performances is hosting a two-day conference about music education centering on El Sistema, the lauded Venezuelan approach. The conference is part of a bunch of offerings organized around Gustavo Dudamel’s present tour with the Simon Bolivar Orchestra of Venezuela.

It seems that symposia on music education are springing up in many places that Dudamel and the SBOV are landing during their journey across the United States. And if the first half of the one organized by Cal Performances yesterday is anything to go by, music educators across the country, even those who profess to knowing quite a bit about El Sistema, are going to be getting a transformative experience.

It’s tempting to provide a blow-by-blow account of the day’s activities. But that would use up too much typewriter ribbon. So I’m going to jot down out a few of the ideas that came up during the discussions that made the strongest impression on me…

1. Eric Booth, the erudite and compelling arts education pundit who gave the keynote speech, on why Gustavo Dudamel thinks El Sistema has been so successful: “There are two reasons for this: One, it makes every child feel like he or she is an asset; and two, we never forget to have fun.”

2. According to Booth, the greatest determinant of the success of a music education program is the motivation of the learners.

3. Teachers in the El Sistema system are described as “C.A.T.S.” which stands for the four qualities that they all possess. An El Sistema teacher is at once a Citizen, Artist, Teacher, and Scholar.

4. Perhaps the most interesting thing I learned about the El Sistema way of spreading music education to large numbers of children is how the kids grow up being both students and teachers at the same time. There are several orchestral levels and those in the second level and above teach the students in the junior levels. I imagine that this duality must inspire a lot of pride, self-esteem and patience in the El Sistema tribe from a young age.

5. Jose Antonio Abreu, who founded the El Sistema movement in the mid 1970s, impressed me with his long, visionary answers to panel chairman Matias Tarnopolsky’s questions. Of the many amazing things the guy said, the most compelling idea — or at least the one that stands out for me — is to do with how he views El Sistema not as a musical organization but rather as a movement for social change. He also added that the word “Sistema” is misleading because it makes people think of a strict and rigid system when in fact he views it as a network of educators and learners.