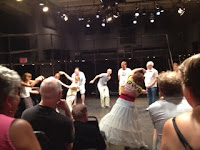 The picture to your left shows a bunch of Washington DC Fringe Festival audience members reenacting a scene from a children’s book about human reproductivity.

The people in the photo, which I snapped in the middle of a show entitled Cecily and Gwendolyn’s Fantastical Capital Anthropological, Inquisitorial Probe, are all pretending to be sperm.

One of them is wearing an imaginary top hat and carrying a red rose. Momentarily, he will catch sight of the egg (also being played by an audience member who can’t be seen in this picture) and make a flamboyant entrance.

What impressed me about all of this is how willing and eager the audience was to participate in the performance. And this was just one of the three shows I experienced yesterday at the Capital Fringe which all emphasized audience participation one way or another. I came away in each case thinking that the audience is really much more of the ‘spectacle’ than the people charged with putting on the productions. Is that a good thing? In some ways, it’s an interesting phenomenon — we learn a lot about ourselves through participating in performance. But it also makes for some pretty dull moments and strikes me as a rather lazy and gimmicky way of making theatre.

I imagine that there must be a smattering of “traditional” performance productions at this fringe festival in which the audience sits quietly on chairs in the dark and watches one or more performers undertaking speech and/or movement before their eyes. But this wasn’t the case remotely for the random sampling of shows I booked myself in to see yesterday.

Being new to Washington DC and not knowing much about the performance culture here, I relied on an article about “10 shows not to miss at this year’s Fringe” in the Washington Post and various other scraps of knowledge I’d gathered from talking to people and looking on the Web to make my decisions about what to see on this first day of Fringe-going.

So perhaps it was a coincidence that all three of the events I picked revolved heavily around audience interactivity. Or perhaps many of the shows at the Capitol Fringe operate along these lines.

I knew that the first item on my list, BFF (which stands for “Best Friends Forever” for those of you reading this who aren’t American teenage girls) would involve me heavily, though I didn’t realize until right before it started that I would be the only audience member. For some reason, when I read the show description, I imagined that it would involve a small group of people all somehow interacting with each other. The group was indeed small — conceptual artist Brian Feldman undertakes his piece with one audience member per “performance.” So during the course of the festival, only 50 people will get the chance to experience BFF. No wonder all his performances yesterday were marked as being sold out.

I was glad to have participated in BFF, though the conceit wore a little thin after a while. The premise is a simple one: The lucky audience member gets to spend two hours in the company of the performer. What happens is really up to the artist and audience member in the moment.

What did we do? Well, first of all, I hadn’t realized that Feldman’s piece required two hours of my time. So I had booked myself into another Fringe show an hour or so later. This reality dictated how Feldman and I would spend our second hour together — he obligingly agreed to buy a ticket for the show and join me. I felt bad about dragging him to see a performance. So I paid for half of his ticket. If we were going to be BFFs, I thought, I ought to start by treating him as I would a friend.

With that piece of business squared away, Feldman — I’m going to start calling him Brian now — announced that he had a scratchy throat and so we went to Safeway to pick up some coconut water to soothe it. We had a mundane little walk around the neighborhood, chit-chatting about this and that. I learned about his history as a performance artist in Orlando, Florida (where Brian performs a show in which he and his family eat dinner on stage together) and about his decision to move to Washington DC, where he has been based for the last four months.

When I learned that I was Brian’s tenth BFF participant, I started to worry about how I could make this a memorable one. I wanted him to remember our two hours together but I didn’t know how I could compete with some of the other people he’s interacted with so far, such as the guy with whom he went on a cycle ride and ended up accidentally knocking off his bike. “Luckily, he had a helmet,” Brian said.

This desire on my part to make an impression was about the most interesting thing I gathered from the experience. I wonder what that’s about? I also wonder what Brian is doing, if anything, to process his BFF encounters during the festival? If performance can be reduced to just hanging out with someone for two hours, albeit a stranger, then what’s the difference between art and life? Perhaps that’s the point. But it’s not a very interesting one if it is. I think all three Fringe events I experienced yesterday suffer from the same problem, to a degree.

As I mentioned earlier,  I ended up dragging poor Brian (who mostly seemed tired and strung out during our time together) to the next Fringe production on my dance card. It was called The Circle, and it revolved around a 30-minute audio walking tour.  I made a half-hearted attempt every now and again to stick with Brian, but he seemed to be in his own world most of the time, and not a very happy one at that. He loitered behind the rest of the group for most of the walk with his hands on his ears (perhaps he was having trouble with his headphones?) and a scowl on his face. I decided to just immerse myself in the experience of The Circle and not worry about the fact that I was still technically “in another show.”

As in Cecily and Gwendolyn’s Fantastical…, which would be my third stop of the evening, the people who attended The Circle seemed extremely excited to be part of the proceedings. Most of the group, which had about 10 people in it, behaved like lemmings. We followed our tour guide, a sweet young man by the name of Otis who has the physique of a dancer, all around the neighborhood. When he skipped, we skipped. When he took someone’s hands as we walked on a low wall, we all grabbed the hand of the person to our right (except for Brian, who didn’t seem to want any part of the action.)

Every now and again, Otis would stop to examine an unusual object that had been placed in a tree or against a wall, motioning for us to do the same. We glided past a few performer-plants — someone handing out sketchbooks for us to draw a picture in and a guy who stood still in a clearing, holding a torch which spurted water, like a human water fountain. At one point, we stopped to look at some books that had been placed at the foot of a tree and Otis started doing yoga poses with a book in his hand. Most of us didn’t hesitate to undertake yoga poses with him for a few seconds before we danced off to the next curiosity.

All the while, the audio was going in our ears. But there was so much to look at that I didn’t really get much of a sense what the voices and sounds coming through were about. It had something to do with time travel. I later found out that the performance piece was conceived to be performed in the Dupont Circle neighborhood (that’s what the title of the show refers to.) It will be performed there later this summer and in the fall. I’m guessing that the references in the audio recording will make much more sense in that setting. In any case, I didn’t pay much attention to what I heard. What I liked about the experience was that it turned the neighborhood into a wonderland. It made me see things in a different way, beyond the usual buildings and trees and grass and passersby.

I already mentioned the third show of the day — Cecily and Gwendolyn’s Fantastical Capital Anthropological, Inquisitorial Probe. This production was the first I experienced in a conventional black box theatre space. It involved two performers pretending to be Victorian-era anthropologists traveling in time to 21st century America to study the people of that world. The performers’ fake upper-crusty British accents and white, ankle-length hoop skirts were a nice touch. And the discussion they created with the audience — in this case about education (which quickly devolved into a conversation about sex education) was gratifyingly interactive. The audience really did share their thoughts and happily got up to reenact the scene described above.

But I also found the schtick to predictable and I left thinking that I hadn’t learned a whole lot about anything much except that people apparently like to pay to be part of “scientific” experiments. What I did like, however, is the fact that the intrepid anthropologists are taking the opportunity to document their findings on a website, to which members of the public can also contribute. So the “performance” lives on in a fun and informative way through some measure of analysis.

OK. Now I’m off to the Goethe Institute for another day of fringing.