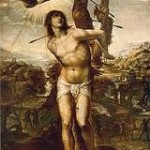 On last week’s VoiceBox, composer and blogger Brian Rosen and I explored the theme of “badness” in vocal music. You can read Brian’s accompanying blog post on the broadcast here.

Towards the end of the show, we talked about songs that possess many of the qualities shared by sub-par efforts and yet somehow transcend things like inane lyrics, wavering intonation, a dirge-like melody and inept musical instrument mastery to enter the rarified realm of the “so bad it’s good.” Brian presented a compelling case for The Shaggs in this regard.

I was thinking about this transcendent category of bad music while attending a performance by the San Francisco Symphony over the weekend of Le Martyr de Saint Sebastien, a lavish musical spectacle created by Claude Debussy based on poetry by Gabriele d’Annunzio.

The piece is a misfire on a massive scale. Even the program notes allude openly to its “perfumed” writing and overall sense of “kitsch.” Program annotator Michael Steinberg even goes as far as to quote the impresario who produced the premiere, Gabriel Astruc, as saying: “I don’t understand it at all. I have brought together the greatest musician, the greatest poet, the greatest designer, the greatest choreographer–and it’s bad!”

Michael Tilson Thomas, who led the orchestra in the concerts which drew on the forces of a massive orchestra, the San Francisco Symphony Chorus and a coterie of soloists helmed by the great vocalist Frederica von Stade in the spoken role of The Narrator (Sebastian himself), obviously thought that the work was worth resuscitating.

I’m afraid I disagree. Even Frederica von Stade with her beautiful French accent couldn’t bring life to d’Annunzio heavy-handed and stilted prosody. The video projections featuring a lightly-clad male dancer cavorting and a big supine lily, and the soloists billowing gospel-singer-like robes added a layer of camp silliness to the proceedings. Debussy’s music has something going for it, at least. There are spine-tingling spectral moments and ardently lush choral episodes. The orchestra and chorus acquitted themselves well. But with all the stage business going on, it was hard to really home in on whatever musical merits the work possesses.

I’m grateful that the Symphony played Janacek’s silvery Sinfonietta in the first half of the program. It’s one of the greatest pieces ever written for an orchestra and it created a sharp contrast with the much more highly-hyped puff piece that made up the second half.

The fact that Debussy composed the music for Le Martyre in the same year that San Francisco Symphony was founded (1911) is not a good enough reason to resurrect the work for the orchestra’s 100th anniversary season.