You are here: Home / Archives for Urs Schönebaum 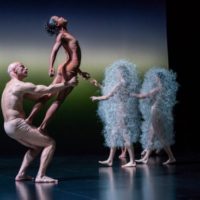 Sasha Waltz & Guests comes from Berlin to BAM. The title of Sasha Waltz’s Kreatur is German for “creature,” since Berlin is where her company is based. At some point during the performance of the piece by Sasha Waltz & Guests at the Brooklyn Academy of Music’s Howard Gilman Opera House, I began to wonder whether the singular noun might allude to one feverish entity, with the … END_OF_DOCUMENT_TOKEN_TO_BE_REPLACED

This blog acknowledges my appetite for devouring dancing and spitting out responses to it. Criticism that I love to read—and have been struggling to write ever since the late 1960s—probes deeply and imaginatively into choreography and dancing, … END_OF_DOCUMENT_TOKEN_TO_BE_REPLACED